I started this blog in a rush a few weeks ago to post notice of the event I recently organized with Jenny Jaskey at Miguel Abreu Gallery in New York, which featured Ray Brassier, Suhail Malik and Reza Negarestani in conversation around the themes of Reason, Freedom and Enlightenment. This will be the first of a series of events we will organize under the name Happy Hour. Those interested in reading the forthcoming transcript of the conversation and hearing about future events can find more information from the Happy Hour site.

I’d planned a rabid flurry of posts to follow but have been too busy to devote the time to it. At any rate I think its probably better to build up slowly at first as I feel out how I might want to use this forum. So for now, sporadic bursts rather than steady invective! 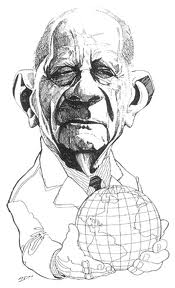 The first thing to do is to give a quick update on the project which absorbs most of my time, a book, due out next year, on Carl Schmitt’s spatial thought. I am co-authoring the book, On Schmitt and Space, with Claudio Minca of Wageningen University’s Cultural Geography Group, my former PhD supervisor, and it is contracted to Routledge as part of their Interventions Series, edited by Jenny Edkins (Aberystwyth University) and the wonderful Nick Vaughan-Williams (Warwick University).

My doctoral thesis, The Crisis of Political Form: The Question of Space in the Work of Carl Schmitt, completed last year at Royal Holloway, University of London’s Geography Department, provides the broad outline of the book. The book will confirm the central arguments presented in the thesis and follow its diachronic approach, charting the development of Schmitt’s spatial thought in relation to his changing political and personal circumstances and various lineages of modern European political and geographic thought. However, the analysis will be extensively developed by drawing on work we have done on Schmitt both separately and in collaboration (see for example our contributions to Stephen Legg’s edited volume Spatiality, Sovereignty and Carl Schmitt. Geographies of the Nomos and our recent guest editorial in Political Geography, The Trouble with Carl Schmitt).

The section of the book addressing Schmitt’s spatial thought during the Nazi years will be particularly informed by Claudio’s previous work on Schmitt’s conception of the border (with Nick Vaughan-Williams, here), his relationship to Nazi geographies (with Trevor Barnes and Paolo Giaccaria, here and here) and his influence on Italian political thought, particularly Giorgio Agamben and Carlo Galli (here and here). The later sections of the book will bear the traces of work I am currently developing on the peculiar ‘spatial histories’ I argue structure Schmitt’s late works such as The Nomos of the Earth, The Theory of the Partisan and the fascinating but overlooked Land and Sea (a poor translation of which you can read on this dreadful American neo-fascist site if you care to!). I will publish some of this material in the coming months but was grateful for the opportunity to have presented elements of it at this year’s AAG conference in Los Angeles as part of a panel on Space and violence (here) and  as part of a panel on Eschatology and World Politics I co-organized with with Ross Adams (London Consortium and Bartlett School of Architecture) at the forthcoming RGS-IBG conference in London (here).

I’ll post more about the book project and related matters as it develops but now back to writing it!